The married couple joyfully broke the news on Instagram this Tuesday with a hospital snap of them cradling their swaddled newborn.

‘Love and happiness have reached heights we never even knew existed,’ they crowed in the caption before announcing the name and date of birth. 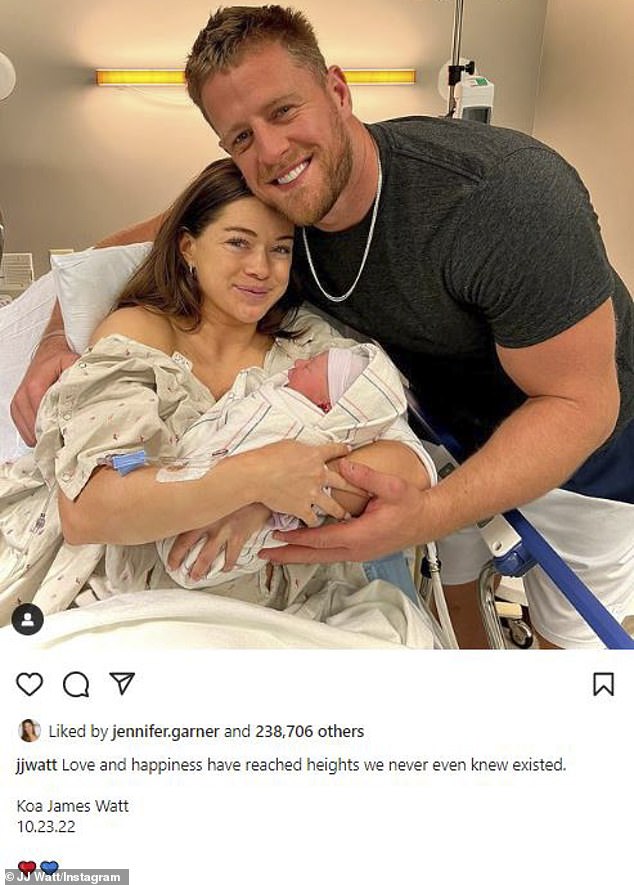 They were flooded with warm wishes in the comments, including from JJ’s brother TJ Watt, who also plays for the NFL.

JJ and Kealia were purportedly first introduced by her brother-in-law Brian Cushing, who used to be JJ’s teammate in the NFL.

Brian, a retired linebacker, is married to Kealia’s sister and fellow soccer player Megan and shares three sons with her.

Kealia and JJ announced their relationship in 2016, and in May 2019 he proposed to her over a romantic ocean view on a pier in the Bahamas.

They returned to the Bahamas to get married on Valentine’s Day 2020, just before the coronavirus lockdowns swept much of the world.

JJ, who plays for the Arizona Cardinals, revealed to the public this June that Kealia was pregnant with their firstborn child.

He posted a romantic album of him posing with Kealia as she modeled a walnut brown dress that accentuated her burgeoning baby bump.

In the caption he gushed that he ‘could not be more excited’ and underlined the emotion by adding a couple of heart emoji.

NFL star JJ Watt and soccer player Kealia Ohai welcomed their first child Koa James Watt into the world on Sunday. The married couple joyfully broke the news on Instagram this Tuesday with a hospital snap of them cradling their swaddled newborn. ‘Love and happiness have reached heights we never even knew existed,’ they crowed…

Previous Post
Lewis Hamilton rocks a trendy double denim look as he arrives to film Jimmy Kimmel Live in Hollywood
October 26, 2022
Next Post
Katharine McPhee flashes a hint of midriff in a white outfit while at the Solaria Culture Exhibition
October 26, 2022