Home goods conglomerate Unilever has recalled millions of its dry shampoo products after determining that they contained the human carcinogen benzene.

The recall affected both Canadian and US markets. The company announced the recalls in both countries earlier this week.

The Food and Drug Administration said this week that Unilever’s move to pull millions of dry shampoos from the US market was made ‘out of an abundance of caution.’

There have been no reports of adverse effects related to benzene exposure in the US, but the chemical was found in the products marketed in Canada.

Health Canada, the government health agency, announced the recall this week for 15 different products manufactured under various brands under Unilever.

Over a million of the affected products were sold in Canada between January 2020 and October 2022.

Continued exposure to benzene over a long period of time can cause leukemia, blood cancer of the bone marrow, and blood disorders which can be life-threatening.

Pregnant women should also limit their exposure to benzene wherever they can. The chemical has been proven to disrupt a developing fetus in pregnancy. 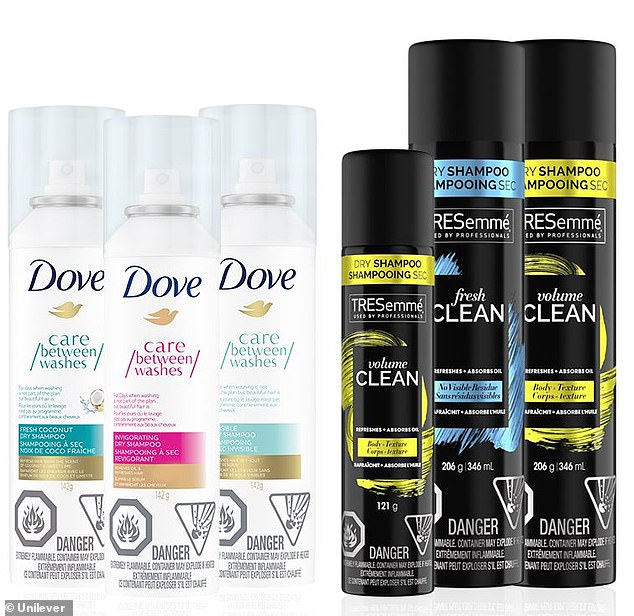 The Canadian health agency recalled millions of products after they were found to contain benzene. While US health officials did not confirm that the products sold statewide were tainted, Unilever pulled them from US markets out of caution.

Benzene is a cancer-causing chemical, also known as a carcinogen, that is widely used in manufacturing in the US.

It is used in the creation of plastic, nylon, rubbers, paint and glue products.

It can also be found in tobacco smoke, motor vehicle exhaust and industrial emissions.

Long-term exposure to the chemical has been linked to severe damage to a person’s blood.

It has been linked to blood cancers like leukemia and non-Hodgkin lymphoma.

The chemical has also been linked to anemia.

Health Canada said, ‘Consumers should immediately stop using the recalled product and dispose of it in accordance with the instructions for disposal on the packaging.’

The recalled products in the US include those made by Dove, Nexxus, Suave, TIGI (Rockaholic and Bed Head), and TRESemmé.

Aerosol products including dry shampoos and hairsprays that use butane, propane or other propellants are at greater risk of being contaminated by benzene.

Benzene is a raw material that is commonly used to produce chemicals that make plastic, rubbers, paint, resins, synthetic fibers, and glue. It is also found in crude oil and is a major part of gasoline.

Inhalation of high concentrations of benzene in the short term can cause a myriad of adverse effects such as dizziness, headaches, irregular heartbeat, and, in certain severe circumstances, death.

Recalls over concerns about benzene contamination are not unprecedented.

Last year, Procter & Gamble recalled 32 dry shampoo and conditioner products after detecting benzene in some of them.

It was among over half a dozen recalls of products contaminated with the cancer causing chemical.

Also last year, Johnson & Johnson issued a recall for five of its aerosol sunscreens after finding trace amounts of benzene in them.

Home goods conglomerate Unilever has recalled millions of its dry shampoo products after determining that they contained the human carcinogen benzene. The recall affected both Canadian and US markets. The company announced the recalls in both countries earlier this week. The Food and Drug Administration said this week that Unilever’s move to pull millions of…