With Medicare Advantage enrollment growing, here are the stocks that could benefit (UNH)

Medicare Advantage enrollment has seen steady growth over the last 15 years, and over that time, so have the fortunes of many managed care companies that provide plans.

According to the Kaiser Family Foundation, nearly half of all Medicare enrollees — 48% — were also in an MA plan this year.

As MA becomes a bigger source of revenue for health plans, here are the managed care companies that are benefitting the most.

UnitedHealth (NYSE:UNH) is by far the largest MA insurer based on enrollees, with 7.9M. That accounts for 28% of all MA enrollees.

The insurer has also seen nice MA growth over the last 12 years. In 2010, its plans accounted for 20% of overall MA enrollment. Between March 2021 and March 2022, the firm added more than 749K beneficiaries.

In its just reported Q3 2022 financial results, the MA and retirement segment brought in ~$27.9B, a ~12% increase from the prior-year period.

The second largest MA insurer in the country, Humana (NYSE:HUM) accounted for 18% of all enrollees. It has 5M enrollees in its plans.

That 18% figure has remained steady since 2016. Humana (HUM) recently benefitted as it is one of two companies to see Medicare Advantage Star Ratings increases for the 2023 rating year based on their largest contracts.

In February, the company said it was taking initiatives that would allow it to fund $1B in growth and investment in the MA business. 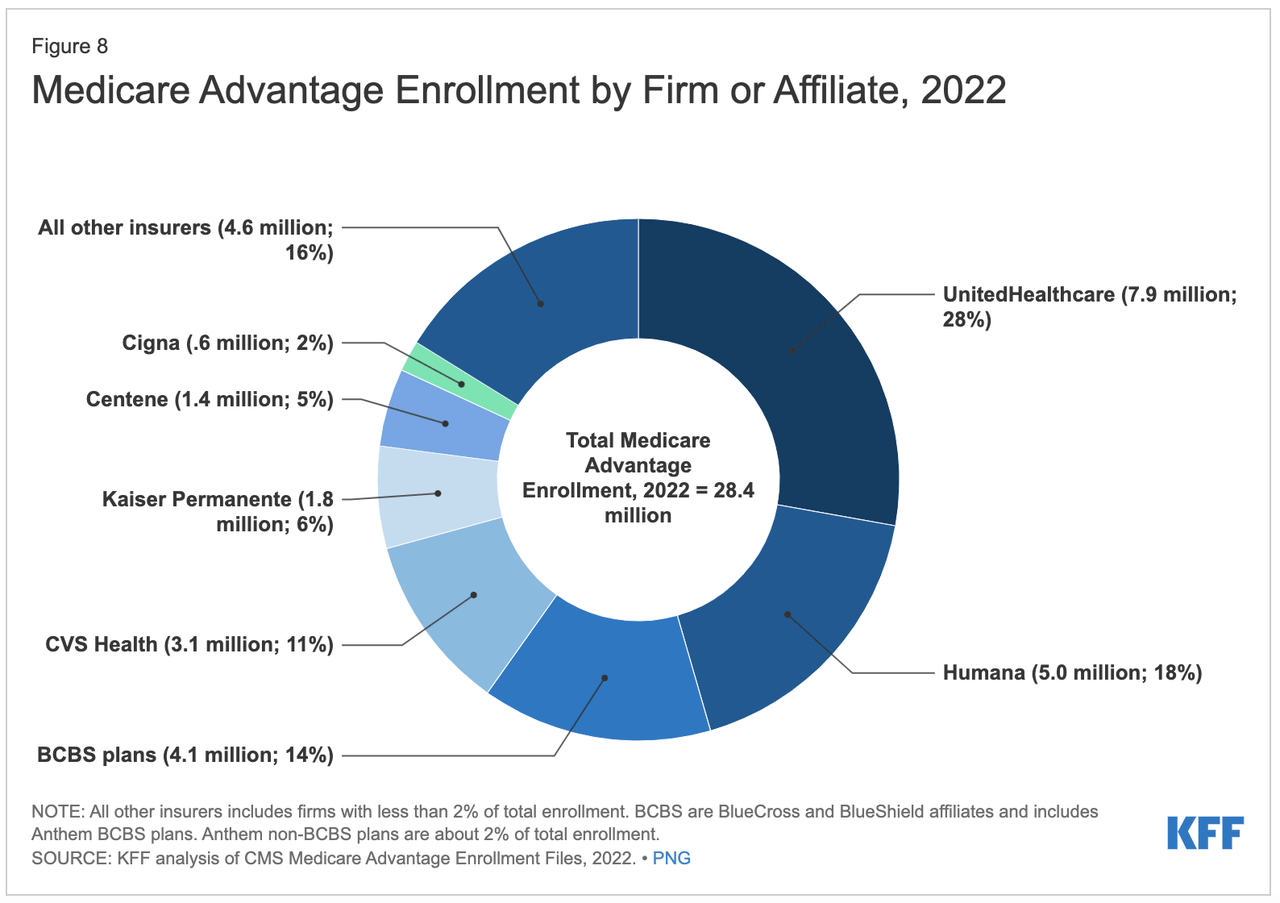 This year, all BCBS MA plans accounted for 4.1M enrollees, 14% of the nationwide total. BCBS plans’ share of MA enrollees has only decreased by a few percentage points since 2011.

For 2023, Elevance Health said that three-quarters of its affiliated MA health plans will have zero-dollar premiums.

Thanks to its ownership of Aetna, CVS Health (NYSE:CVS) has a stake in MA. This year, it has 3.1M MA members, accounting for 11% of all enrollees.

CVS’ (CVS) share of the MA pie has increased significantly since 2011, when it accounted for just 5% of total enrollment.

Earlier in October, CMS downgraded Aetna’s National PPO MA plan to 3.5 stars, meaning it would no longer be eligible for CMS’ quality bonus payments. CVS (CVS) said it expects to mitigate any financial impact from the downgrade.

All_About_Najmi/iStock via Getty Images Medicare Advantage enrollment has seen steady growth over the last 15 years, and over that time, so have the fortunes of many managed care companies that provide plans. In 2007, there were ~8M Medicare Advantage (“MA”) enrollees, according to an analysis from the Kaiser Family Foundation (KFF). In 2022, ~28.3M seniors…